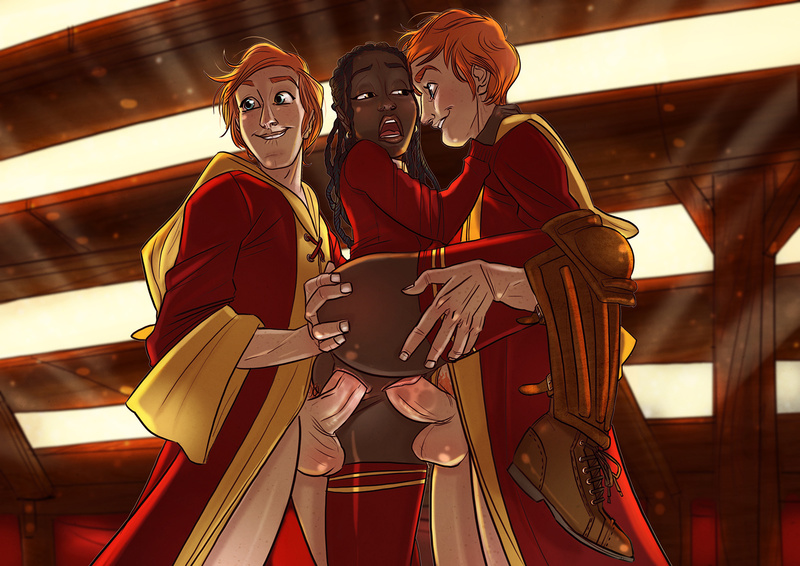 Harry was having the best time of his life; he was with the people he cared about the most, and he was at the event of the year; the Quidditch World Cup. Harry, Hermione, and most of the Weasley family had just arrived at the campground, and Harry already knew it was going to be a match that he’d never forget.

Mr. Weasley had just asked Harry, Hermione and Ron to go and fetch some water for their tent. As they made their way through the mass of exotic tents and people, Harry was stopped by an odd looking salesman. The salesman wasn’t even trying to blend into the muggle environment; his appearance was way over the top; flashy orange and yellow clothing, topped off with a bright neon green top hat.

Harry would have simply continued on walking, brushing the madman aside, but for some reason he was drawn to him.

END_OF_DOCUMENT_TOKEN_TO_BE_REPLACED

Harry Potter, Ron Weasley and Hermione Granger sat around the campfire outside their tent, leisurely toasting marshmallows on long forks that Hermione had conjured for them. They talked very little, which was the only real clue that this comfortable scene was not what it appeared.

In actuality, it was the trio’s last night before embarking on the final leg of Harry’s journey to fulfill his destiny and rid the Wizarding world of Lord Voldemort, the most evil dark wizard who ever lived. After Albus Dumbledore, Hogwarts’ beloved Headmaster, was killed at the end of their sixth year, Harry had been determined to set out on this journey alone, because nearly everyone important in his life had met an untimely demise at Voldemort’s hand. Harry’s own parents had been killed by Voldemort personally when Harry was just a year old. Voldemort attempted to kill Harry as well, but the curse rebounded upon the Dark Lord, leaving him in a less than human state without a proper body of his own, and leaving Harry with a lightening shaped scar and unwanted fame as “The Boy Who Lived.”